EAF Off-Gas/Dust Radiation Detection System
INTRODUCTION (Why radioactivity has become such a problem in the Metals Industry?): 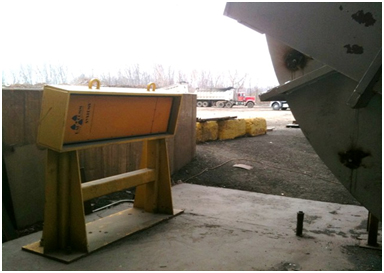 To date there have been 65 reported incidents of SEALED radioactive sources being smelted in ferrous and non-ferrous operations. Smelting a sealed source in a furnace causes serious plant contamination and costs millions of dollars in plant decontamination costs. Surprisingly, in at least 20 of these incidents, the companies were monitoring their incoming scrap shipments with sensitive radiation detection systems at the time of the accident. In two of these cases, the companies had multiple incidents within months of each other. The worst reported incident so far in this decade occurred in Spain. A steel plant melted a source and hundreds of Kilometers away the radioactive dust particles being carried in the wind set off alarms in Switzerland. he plant had radiation detection systems monitoring their incoming scrap at the time. There are a number of reasons for the sealed source to have been missed by the detectors.

Rad/Comm has addressed this problem and has taken a different approach to monitoring the Off Gas/Dust Collection system for radioactivity. With our detection system design the customer can configure the system to suit the requirement of the application.

For example, with the OffGas detection system we utilize multiple detection units situated at strategic points on the Off-Gas/Dust Collection system. Each detector assembly includes state-of-the-art scintillation material and electronic hardware that allows maximum detection capability to be achieved for low level radiation emissions in a Dynamic and Static mode. The assemblies will be connected to a central detector controller via low voltage signal cable where all signals are processed at an extremely high sampling rate allowing detailed statistical analyses to be performed on each detector signal. From the data analyses, the “Lowest-Achievable-Alarm-Level” (LAAL) is set on an automatic continuous basis. The Detector Controller can simultaneously monitor up to 4 detector assemblies from a distance of up to 300 meters away. The detector controller will be coupled to a Central Control Console (mounted in an occupied area) via low voltage signal cable or by wireless communication (optional). The Central Controller will include an illuminated display readout, keypad, alarm indicator, alarm reset and PLC I/O port. The Control Console will provide the user with measured radiation levels for each detector, alarm information, power interruption data, system maintenance messages and date/time. The Console will also allow the adjustment of alarm threshold levels, printout of alarm and power interruption data and various other system configuration functions. There is an option to connect the plants PLC system for the downloading of alarm locations.

The system user will have full and complete control over the systems operating condition. Because of the critical function of the Off-Gas/Dust Collection system radiation detection system, it is extremely important that the more information that can be provided to the User the better. The detectors signal discriminator settings and signal process algorithms cannot be adjusted but there will be full adjustment capability of the Controllers permutations and combinations alarm algorithms. In addition, the resultants (alarms) of the User set permutations and combinations analyses will be made available via the PLC I/O port. This information together with selected variables from the Off-Gas/Dust Collection system, such as, flow rates and mechanical valve I/O signals, the Rad/Comm PLC flow chart alarm algorithm can be customized for each plant application.

Utilizing this method of monitoring a Plants Off-Gas/Dust Collection system for High and Low level radiation emissions will provide the necessary information for plant personnel to make a fast decision as to the corrective measure that will need to be taken in the event radiation has been detected. It will help minimize the spread of radioactive material and provide early warning to personnel to avoid being unnecessarily exposed to the radioactive dust particles.